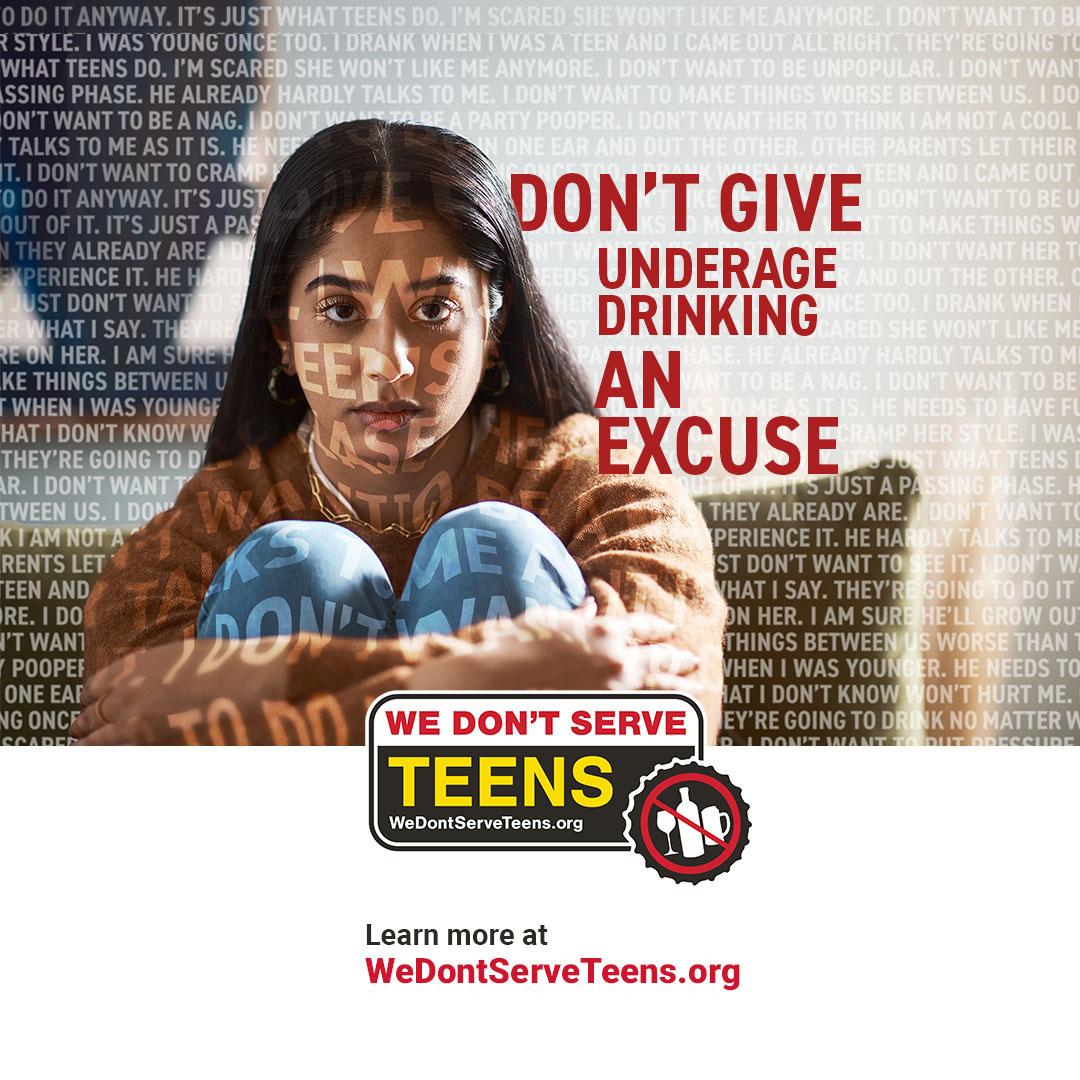 - Underage drinking levels are at historic lows, and one way to continue this trend is to prevent teens’ access to alcohol. The We Don’t Serve Teens campaign, first developed in 2006, is a community-level collaboration of alcohol suppliers, retailers and distributors working with parents and prevention groups to curb underage drinking.

Today, participating groups and organizations are voicing their commitment to the campaign and its important message that debuts a refreshed look and feel that is digitally modern, culturally inclusive and demographically diverse.

The We Don’t Serve Teens campaign takes a united stance throughout communities nationwide: “Don’t serve alcohol to teens. It’s unsafe. It’s illegal. It’s irresponsible.” Partners are encouraged to post messages against underage drinking in stores and restaurants, engage with the campaign online, hear messages on the radio and even include information on food and beverage delivery receipts. The materials will also serve as a reminder for families to have conversations at home about expectations, values and practice saying NO to underage drinking.

“Underage drinking has declined dramatically but remains a safety issue for teens that is often overlooked, disregarded, or takes a backseat to more pressing concerns,” says Chris Swonger, President and CEO of Distilled Spirits Council of the United States (DISCUS) and Responsibility.org. “The We Don’t Serve Teens campaign brings a critical mass of public and private entities together to spotlight underage drinking prevention. We have made a lot of progress over the years and fewer teens are drinking alcohol. By working together, we hope to make even more progress on this important issue.”

In 1991, 80% of American teens had consumed alcohol at least once in their lifetime, but today, more than three out of five teens (64%) have never consumed alcohol (Monitoring the Future, 2021). Although this trend is positive, challenges to ending underage drinking remain. The availability of alcohol to those under the legal drinking age remains high with eight out of 10 high-school seniors reporting that it is easy for them to access alcohol. Working together, significant strides have been made in reducing underage drinking, but until it is eliminated, there is still work to be done, according to Responsibility.org.

“No retailer wants to sell alcohol to someone who is underage,” says John Bodnovich, Executive Director, American Beverage Licensees. “Retailers are on the front lines in communities across the country -- we are proud to once again lead the effort to prevent underage drinking. We look forward to working with community partners as well as industry partners to keep alcohol out of teens’ hands and stop underage drinking. Responsibility starts with us.”

Visit WeDontServeTeens.org for more information or to participate in the campaign.