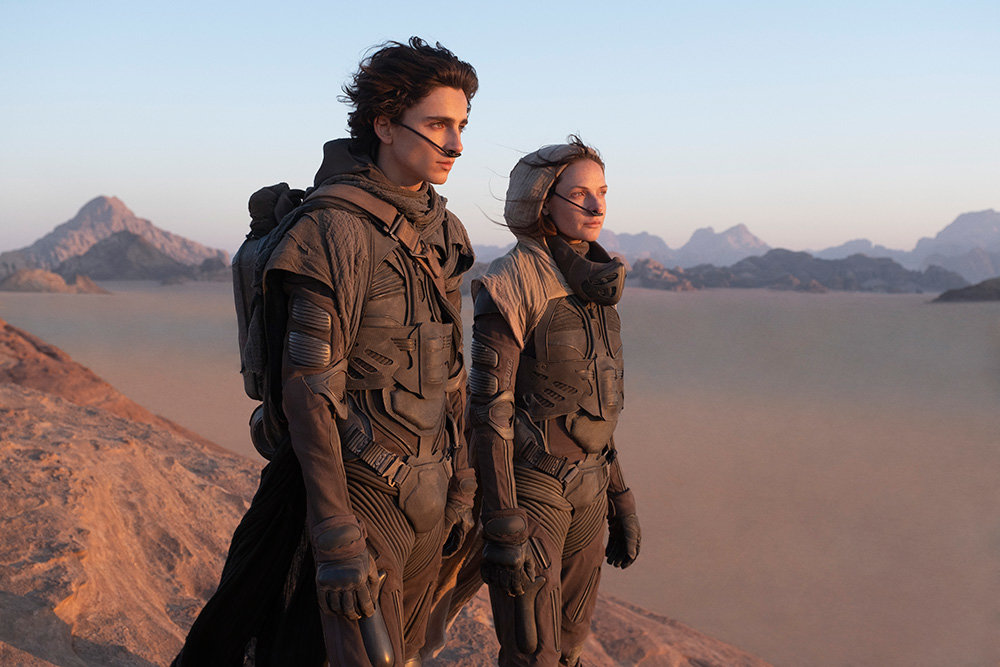 Paul Atreides, played by Timothée Chalamet, wields a crysknife whose blade was made from the tooth of a dead sandworm.
Photo courtesy of Warner Bros. Pictures and Legendary Pictures
Previous Next
Posted Thursday, November 4, 2021 2:17 pm
By Audrey Ruppert

It’s a real shame that Hollywood was not capable of producing cinema that would do “Dune” justice when the books, written by Frank Herbert, were first published in the 1960s. Those unfamiliar with the series might be tempted into thinking the 2021 adaptation has plagiarized from many stories we have seen before, including “Star Wars,” “Avatar” and “Game of Thrones” - when in reality, all of those stories took inspiration from “Dune.” The unfortunate result is that the average viewer will have seen much of this story before - from desert worm creatures, to warring political houses, to imperial occupation and exploitation of foreign planets - when Herbert actually pioneered many aspects of modern science fiction and fantasy.

Nonetheless, “Dune” is an immersive and enchanting experience. You truly do feel whisked away into a new world; most of the movie is just world building. We are introduced to Paul, the son of the duke of house Atreides and a woman of the Bene Gesserit, a pseudo religious order. The emperor of the universe recently ordered the planet Arrakis to be taken away from the Atreides’ enemies, the Harkonnen, and given to the Atreides instead. Arrakis contains a substance called “spice,” which has many uses and is key for interstellar space travel - making spice the most important substance in the universe.

The result is inevitable political tension between the two houses and the native occupants of Arrakis, known as the Fremen. Most of the 155-minute runtime is spent explaining key concepts of the “Dune” universe, and the viewer is left waiting in anticipation for the sequel, where it seems most of the action will occur.

I feel that the film struggles at times with its hefty, almost unwieldy source material. “Dune” certainly deserves an HBO TV series in line with “Game of Thrones” - though it’s not impossible to do justice to an intricate fantasy through film, as the “Lord of the Rings” trilogy shows. I think the film should have spent more time delving into important plot points rather than showing the same moody shots of Zendaya over and over again, since there is so much to cover and not a lot of time to cover it.

Many book fans felt some of the casting choices were questionable. In the books, Paul is 15 years old and is lonely, as there are no other children on the planet his own age and everyone treats him with extreme deference. Timothée Chalamet, who is 25, reads more like a moody, almost sultry, emo teen - I’m not sure he does the best job of conveying the original character’s reluctance to be the hero he is destined to become, but he will certainly bring viewers to the cinema as he is distractingly attractive throughout. Jason Mamoa as Duncan Idaho, a mentor to Paul, is also questionable - he acts like Paul’s buddy throughout, which would be considered inappropriate and above station in the Dune universe. Nonetheless, I feel the film does a decent job of capturing the overall vibe of “Dune” while enticing the unfamiliar into the movie theater with its star power.

I can see why some would accuse the film of “white saviorism,” but I would urge viewers to wait until they have completed the whole series to make any judgements. While the original story did come out in the ‘60s, Herbert was a progressive visionary for his time and Paul is the most unwilling of saviors.

I am hopeful this adaptation will cement “Dune” as a cornerstone of pop culture, and that it will achieve Marvel or “Star Wars” status - because it certainly deserves to be there. While it may not do full justice to the books, “Dune” is still mesmerizing and does a wonderful job of transporting the viewer to a world so different from ours, yet so similar. Hans Zimmer’s score really sets the tone throughout, and I highly recommend seeing “Dune” in a theater to get the full experience.