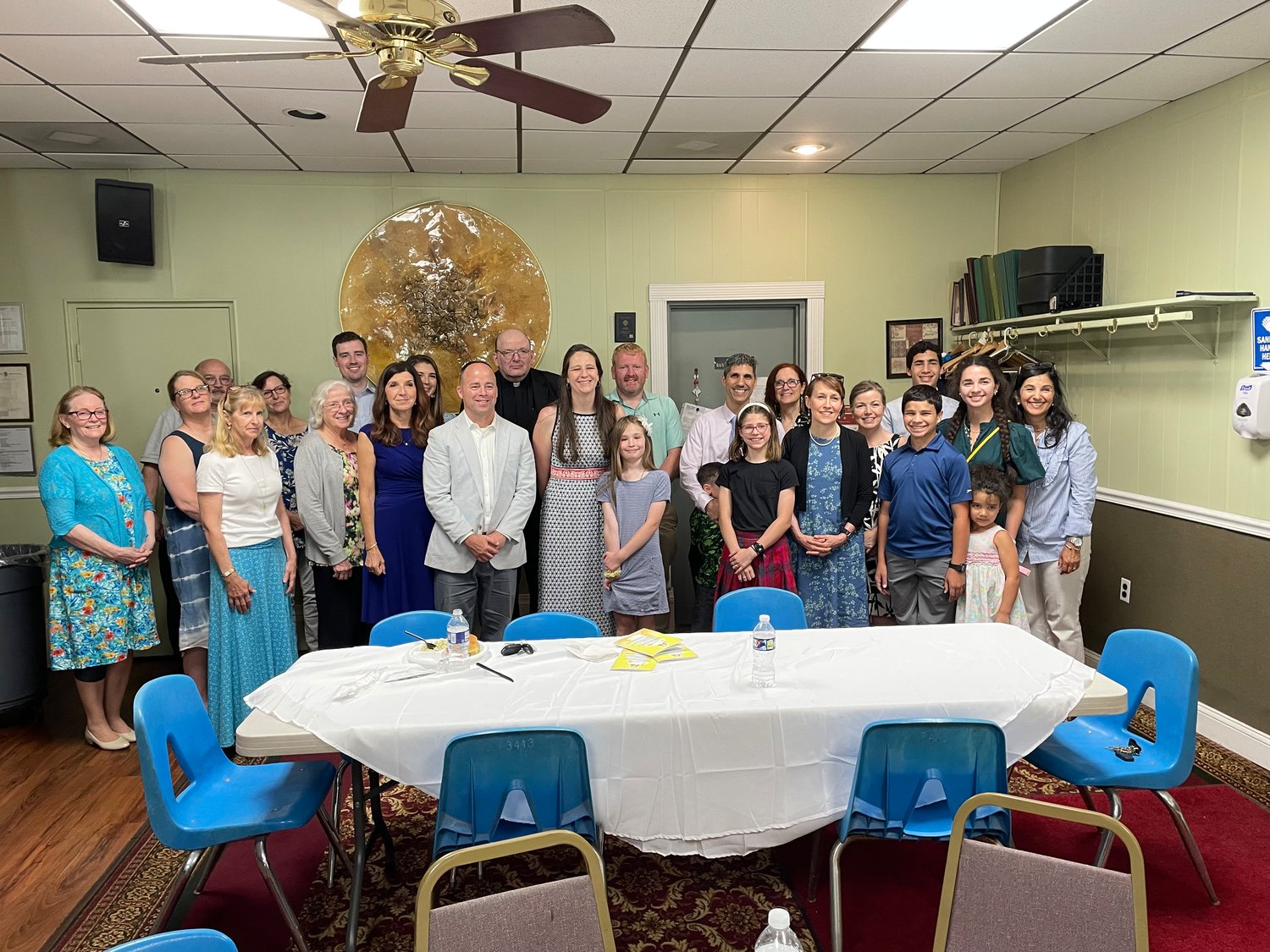 Teacher of the Year honorees Tim Feeney (middle, white jacket) and Susie Hughes (middle, black-and-white dress) were surrounded by family and friends at the KOC local heroes lunch on June 4 at the Columbian Center.
Photo by John Singleton
Posted Wednesday, June 15, 2022 10:29 am
By John Singleton

Recognizing excellence is a tradition for the Severna Park Knights of Columbus council.

“Heroism begins at the local level,” said Brad Zell, newly elected leader of Council 3413. “Good deeds are first experienced personally, individually, but they can grow to have a profound impact.”

On Saturday, June 4, a host of heroes, including teacher Susie Hughes of Divine Mercy Academy in Pasadena, were honored at the Columbian Center on Ritchie Highway.

“Divine Mercy Academy is designed for making saints,” said Ali Ghaffari, founder of Divine Mercy Academy. “Susie’s love of faith and eagerness to share it with her students and among her faculty peers has made an enormous impact on our school.”

At Divine Mercy Academy, a classical curriculum is used to help students “read well, speak well and think well.” Before arriving at Divine Mercy Academy from School of the Incarnation in Gambrills, Hughes taught math for 15 years. She now teaches humanities to fifth- and sixth-graders where math is integrated into a larger curriculum that sharpens reasoning skills and promotes an understanding of order and harmony in the natural world.

“I’m very grateful to Divine Mercy Academy for allowing me to celebrate my Catholic faith in the classroom,” Hughes added.

Lieutenant Robert Simonds of the Earleigh Heights Volunteer Fire Company was recognized as Firefighter of the Year.

“I’m grateful to the Knights of Columbus for continuing their tradition of honoring public service,” Simonds said. “It’s a pleasure and an honor to serve this community and be an example for the next generation.”

Simonds has been with the Earleigh Heights Volunteer Fire Company since 2019. He attended North County High School and is a full-time firefighter for Baltimore City.

Placing a premium on teaching honors, the Knights also recognized a teacher from the area’s newest classical high school.

“Four and a half years ago when the idea of Chesterton Academy in Annapolis was just beginning, Tim Feeney had just converted to Catholicism,” explained Azin Cleary, executive director of the Chesterton Academy. “He’s been the bedrock of our faculty ever since.”

Before teaching at Chesterton, Feeney taught at Rockbridge Academy, a classical Christian school in Millersville, Maryland, where he taught theology and history from 2001 to 2015. At classical schools like Chesterton, the use of technology in classrooms is minimized, increasing attention span and reducing isolation. The conversation-based classroom environment not only supports enriched learning but it also encourages friendship and community.

“The Catholic faith provides an ages-old roadmap in how to go through life,” Feeney summarized. “I feel privileged to help students recognize the truths of the faith. Not just on Sunday morning but through the study of history, literature, math and science.”

Other awardees included Erzebet Nemeth of St. John the Evangelist School for Teacher of the Year, Sydney Keplinger for EMT of the Year, and Corporal Charles Burgess for Sheriff’s Deputy of the Year.