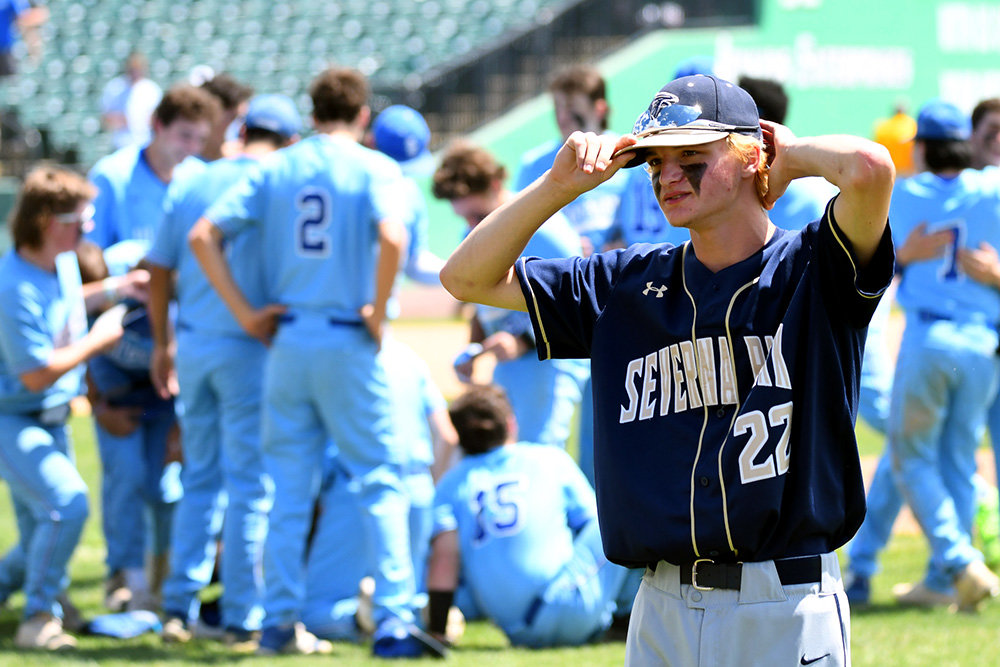 Severna Park outfielder Brooks Harris walked off the field as Sherwood stormed the mound to celebrate their 11-0 win. 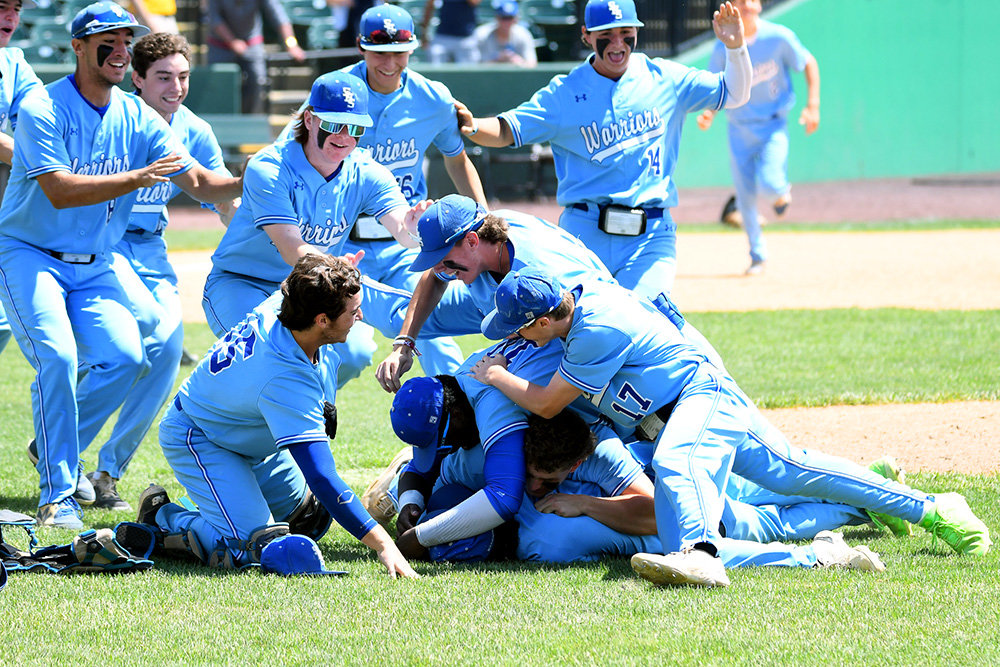 Sherwood players celebrated on the mound after the final pitch. 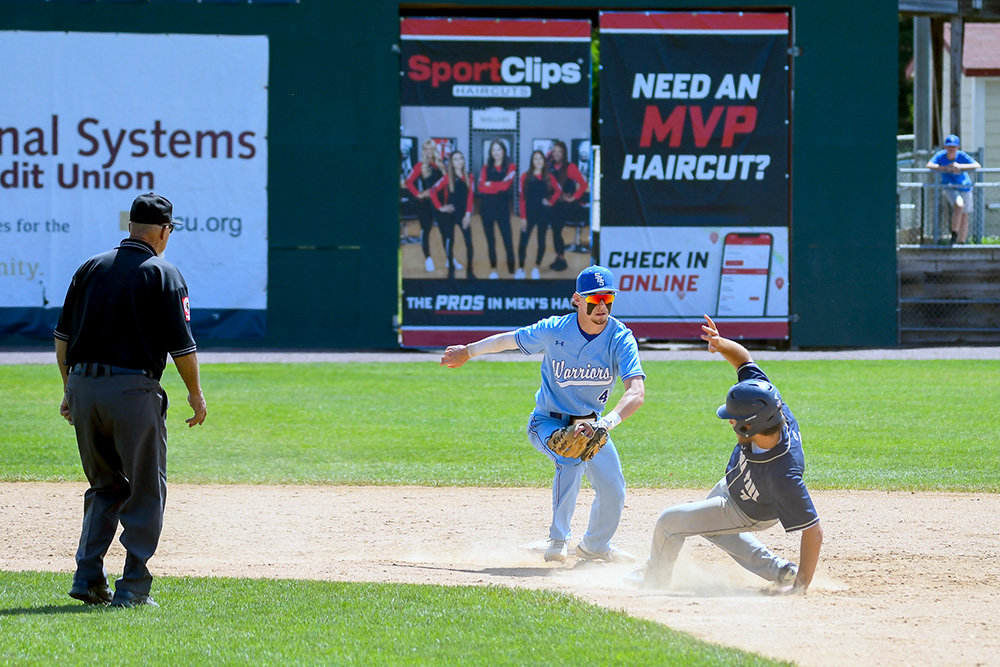 Luke Herz was tagged out to end Severna Park's rally attempt in the third inning. 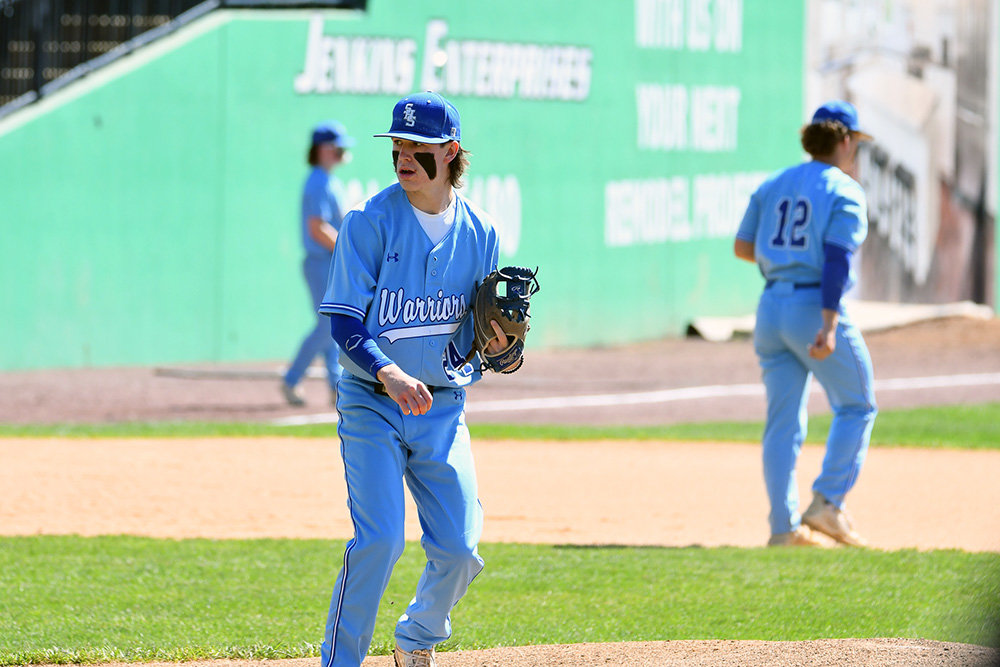 For the second consecutive year, the Severna Park varsity baseball team made it to the 4A state championship game at Regency Furniture Stadium in Waldorf, and for the second time, Sherwood ended their season, this time with a 11-0 shutout ended by mercy rule after five innings.

It was a stunning result for a Falcons team that won 10-0 over Dulaney in the state semifinals and 8-0 over Laurel in the state quarterfinals.

“These guys [Sherwood] have a lot of experience and we picked the wrong time to have our worst game of the year,” said Severna Park head coach Eric Milton. “Mistakes, errors, wild pitches. We had an opportunity in the first inning to get on the board. We didn’t take advantage of it and things snowballed and the ball bounced their way in the first inning, and they picked up four runs and we couldn’t scratch our way back.”

As Milton noted, Sherwood scored four times in the first inning. After surrendering a leadoff walk, the Falcons had a wild pitch, a passed ball, and allowed a double. Sherwood third baseman Ryan Bouma then hit a chopper over third base to make the score 2-0. Amari Allen singled on a 1-2 count, Bouma scored on another wild throw, and Josh Hollowell singled to left field, with another runner scoring on a ground ball to second.

Severna Park couldn’t close the gap, failing to reach base in the second inning before allowing three more runs in the bottom of the second. Their next chance came in the third. James Henson III drew a leadoff walk and reached third base after he stole second and the catcher’s throw sailed past the bag. The next batter struck out, but Luke Herz walked to put runners on the corners. But again, the Falcons could not capitalize.

“We’re a young team and it’s our first time being here [for some players], so we got nervous and couldn’t pull it back together,” Henson said.

Severna Park players were understandably upset after the game, but they still found positives.

“County champions, regional champions, 18-4 and we’re going to plan on being back here next year,” Milton said.

It was the last game for several players, including Henson.

“This program aims pretty high and have made a couple state championships,” he said. “We have made a lot of good memories together. I love this team.”

Senior outfielder Jimmy Miller said the pain was softened slightly by having the support of loved ones in the stands and in the dugout.

“Obviously, nobody wants to get here and lose, but I’ve come to love these guys,” Miller said. “I love the coaches here. It’s been a hell of a season, a hell of a ride, and I wouldn’t have done it with anybody else. I know it’s not the outcome we wanted, but I wouldn’t trade it for the world.”