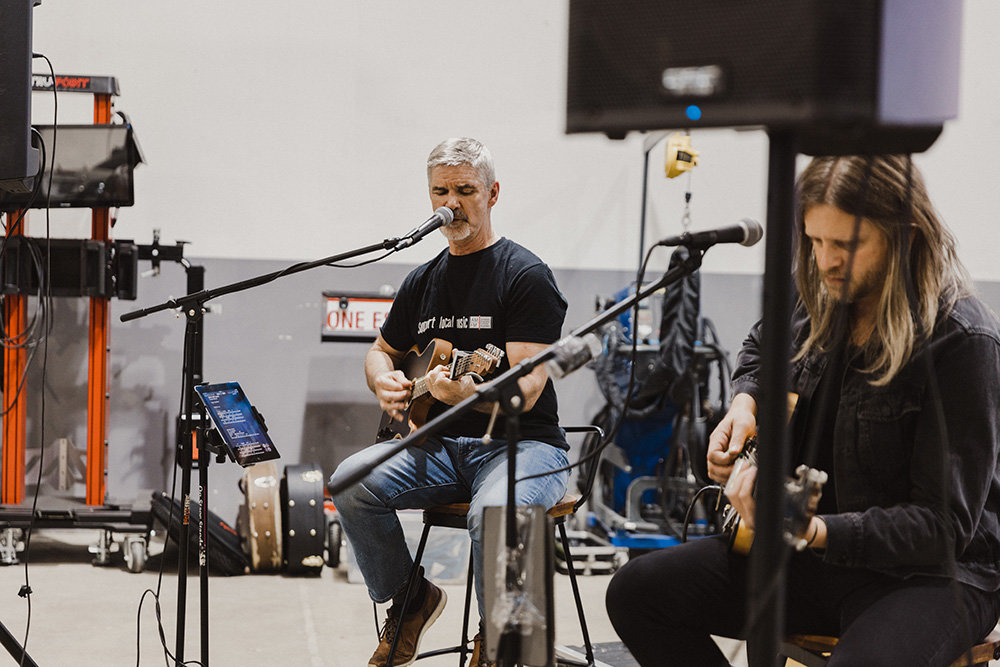 Marty O’Neill (left) and Buddy Spier performed for 120 guests at Severn Auto Body on April 30. All proceeds went to Habitat for Humanity of the Chesapeake.
Photos Provided 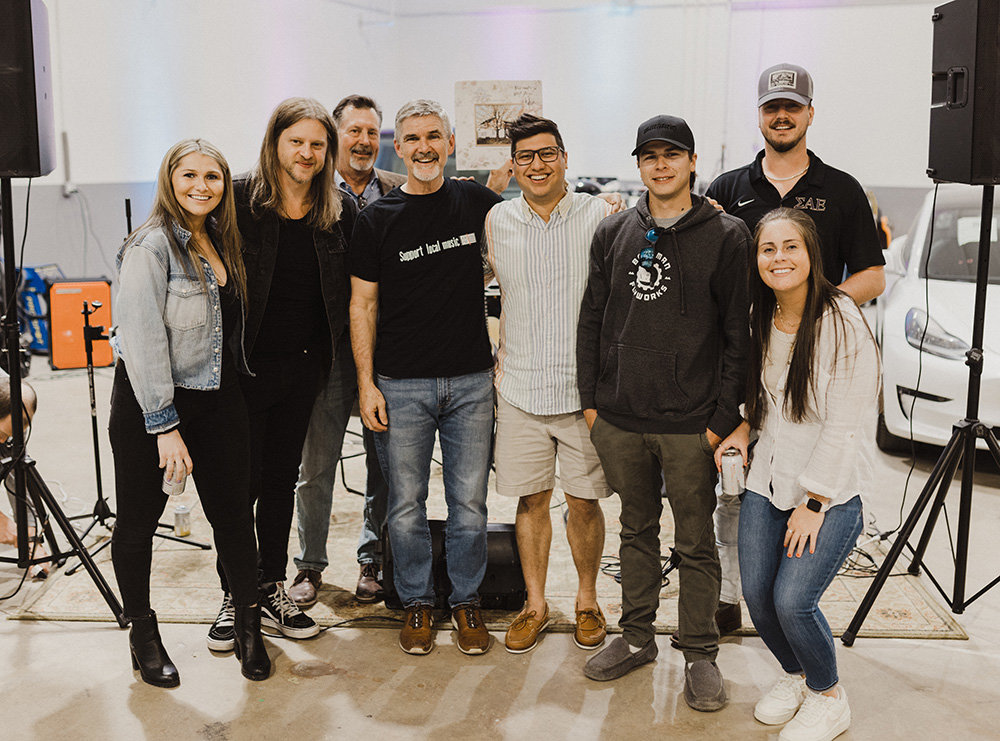 Filled with twangy guitars and raspy vocals, Marty O’Neill’s new EP reflects on important events from the singer-songwriter’s life. He hopes listeners can resonate with some of the stories told in those four tracks.

O’Neill grew up in Pennsylvania in a large musical family with eight siblings.

“I was always surrounded at home by musicians,” O’Neill said. “I have a sister who is a really good piano player and I have a couple of sisters that are really good fiddle players.”

O’Neill grew up singing in choir and school, listening to a variety of artists from singer-songwriters, including James Taylor, to folk artists like Crosby, Stills, Nash & Young.

“Even as a kid, I had written poetry and was kind of fascinated by the written word, stories,” O’Neill said. “Things that I see capture my interest and I felt like, ‘I have to find a way to express.’”

O’Neill stopped playing when he left school but turned back to music again when he was in his 30s.

“I just picked up the guitar and started fooling around,” O’Neill said.

He and some friends and neighbors formed a six- to seven-piece cover band called the 21012 band, named after the zip code of Arnold, Maryland. The current lineup is comprised of two guitarists, a saxophone player, a drummer, a fiddle player, a keyboardist, and a bassist. They mostly play during the spring, summer and fall months in the Annapolis area, and cover music from a variety of genres.

“It's everything from kind of old rock and roll to current country music,” O’Neill said.

Years after he started playing in the band, O’Neill began writing music. He’d written four books about business and leadership and his writing evolved into telling stories through lyrics and songs.

“I always found the way to communicate was through stories,” O’Neill said. “So, I consider myself a bit of a storyteller.”

Although O’Neill plays the guitar, he doesn’t consider himself as primarily a guitarist.

“I think of myself as a singer,” O’Neill said. “The guitar is just sort of there to play along.”

He drew from songs from his childhood, along with more contemporary music from artists including folk singer Ray LaMontagne.

“The matriarch, the rock of the family, was my mom,” O’Neill said. “Everybody that would visit would always have this image when they left of my mom standing in that doorway and sort of waving goodbye.”

O’Neill wrote “Stand Right There” to commemorate the loving, welcoming environment that his mother created.

The second song, “Irene,” named after the hurricane, started out being about the storm before evolving.

“There are sort of nuances in there about relationships and maybe a woman scorned,” O’Neill said.

The third song, “Rooms,” was inspired by a book written by a 15th century nun named Teresa, about spirituality and her view that the soul was like interior castles.

“I started thinking in my mind, ‘Well, what’s heaven look like?’” O’Neill said. “Maybe in heaven, there’s a room for everybody.”

His second single and the last song on the EP, “Play it Again,” came from a yearly tradition. O’Neill’s oldest son, Jack, has a music business in Nashville called Yellow House Entertainment and works with up-and-coming artists in the city.

Every year, O’Neill and his family bring an artist from Nashville to play in his backyard with his neighbors and raise money for them. One year was particularly memorable. An artist named William Morrison and his band came to Maryland and they all played well into the night.

“There were 10 musicians after everybody else went home, just jamming until 3:00 in the morning because we were there and just loving it,” O’Neill said.

The cover of the EP is an old painting created by his mother to depict O’Neill’s childhood home, digitized and looking like old wallpaper.

O’Neill performed a show at the Severn Auto Body garage bay in Annapolis on April 30 to celebrate the release of his EP. The vinyl records of his album were available for sale and proceeds went to Habitat for Humanity of the Chesapeake.

“We were looking for a sort of an industrial setting,” O’Neill said.

He does not plan to do other shows by himself, but he hopes to continue performing with the 21012 band, where he feels he can encourage older people to pursue their passions.

“I think it’s rewarding to me that I can encourage other people to keep being creative,” O’Neill said.