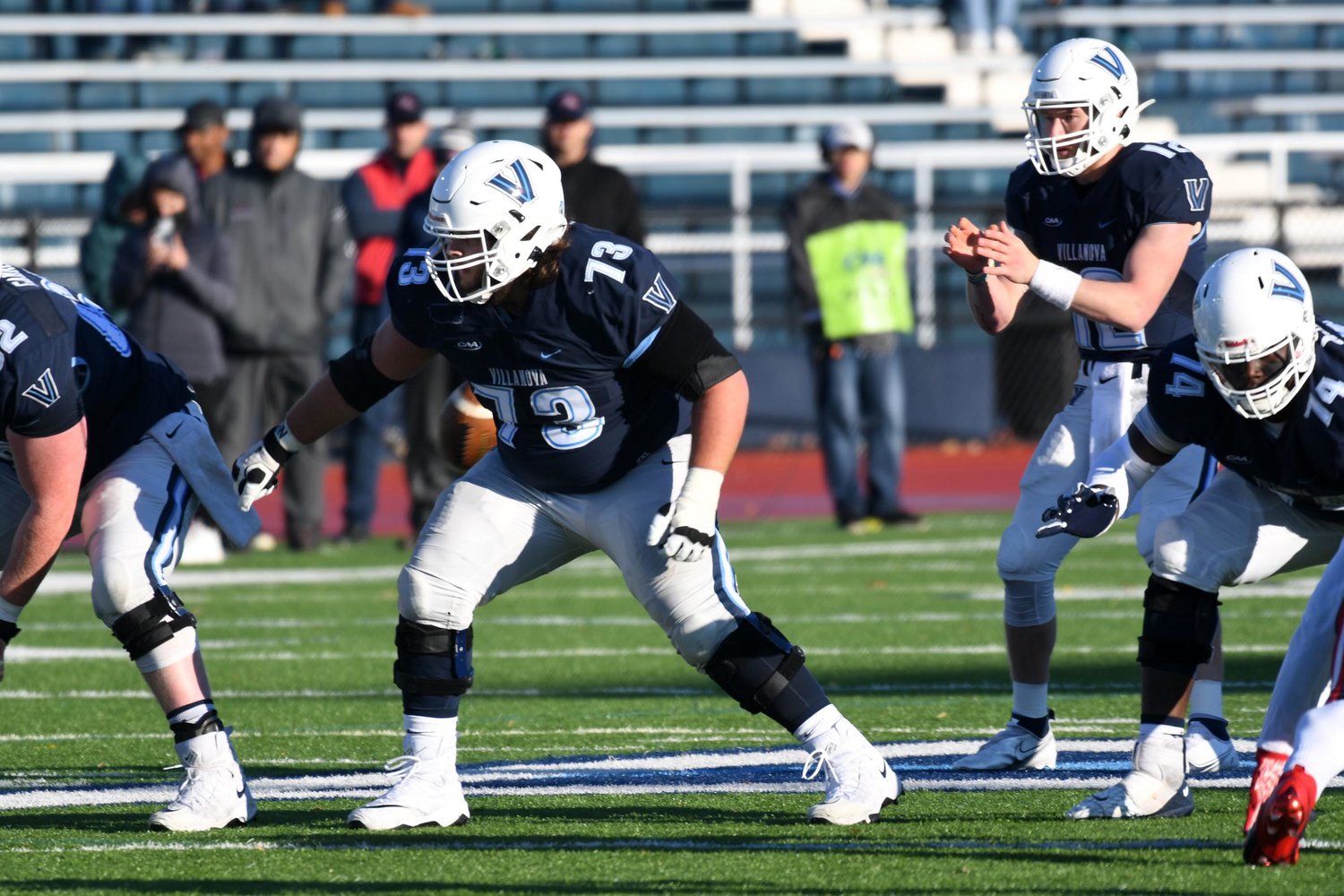 Michael Corbi (left) has developed into one of the best offensive linemen in the Football Championship Subdivision.
Photos courtesy of Villanova University
Posted Friday, January 21, 2022 10:54 pm 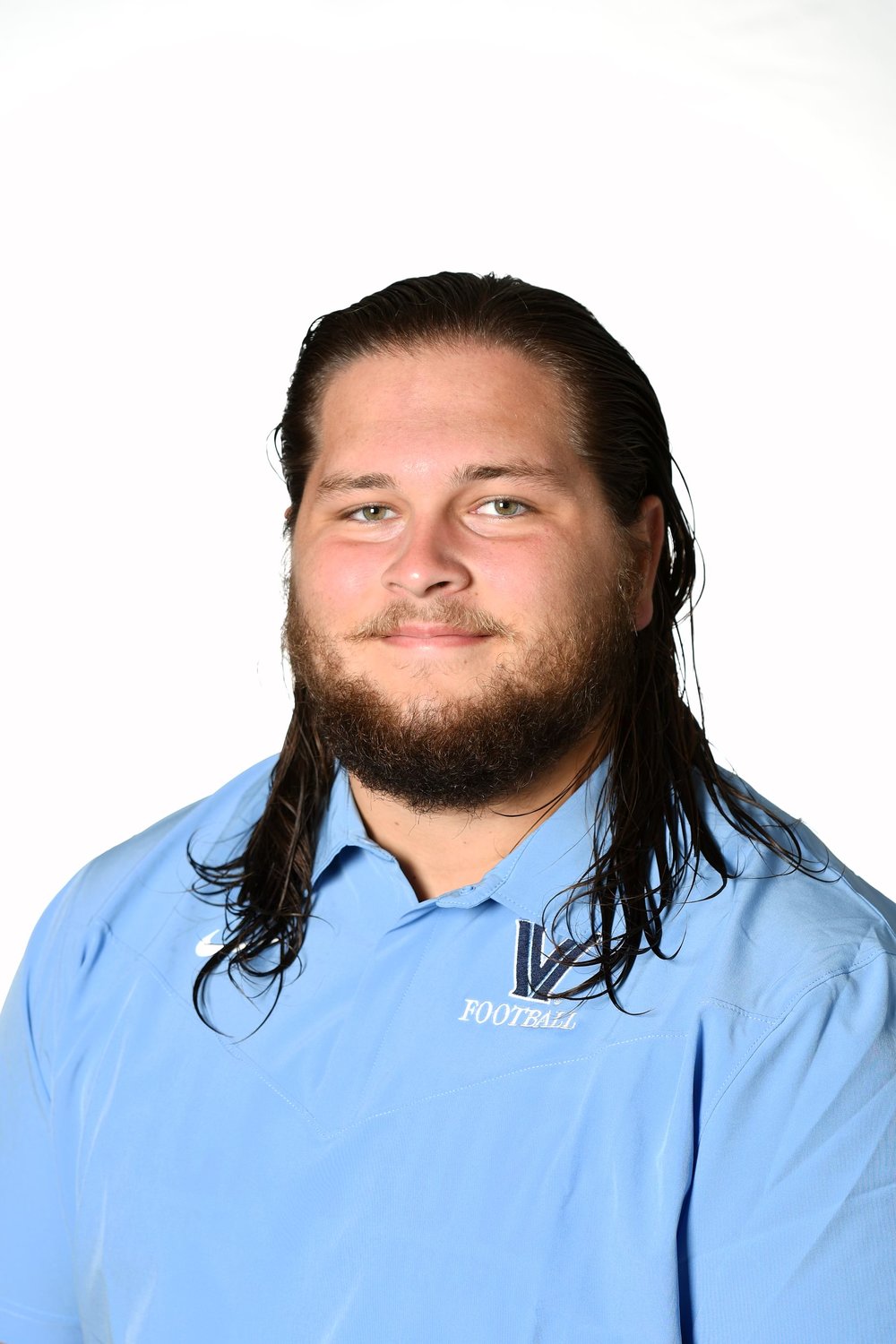 It’s hard to imagine that Michael Corbi, a 6-foot-3, 330-pound offensive lineman for Villanova University has played organized football for only 10 years.

Corbi, an Arnold resident, was still playing soccer for St. John the Evangelist School in eighth grade when he decided to try football with the Green Hornets organization.

“My dad played defensive line for Towson University and he always took me to the Ravens games, so I was around football and liked the game, so I thought I would give it a chance,” Corbi said.

After years of relentless training and great coaching, Corbi was named to the Associated Press All-America Second Team this year for the Football Championship Subdivision (FCS).

Corbi’s storybook journey started out at Mount St. Joseph High School in Catonsville where he was a 5-foot-8, 200-pound lineman on the JV squad. He began to see what it would take to play at the varsity level and had excellent coaching to prepare him for varsity the next year.

“Coach Blake Henry was the coach my freshmen year, but coach Rich Holzer came in my sophomore year and was a great coach and extremely innovative with his offensive knowledge,” Corbi said.

Corbi grew physically during his three years on Mount St. Joe’s varsity team and even played both offensive and defensive lines in his senior year.

“I started looking at colleges and I took a trip to Villanova with my dad and just loved the campus,” Corbi remarked.

Corbi received encouragement from his family and decided to send his senior film to the Villanova football staff. He was offered a preferred walk-on position on the team.

He redshirted his freshman year as the strength and conditioning staff wanted to “reshape” his 350-pound frame. Corbi dropped to 260 pounds that year and then the team built him back up to compete at a major college level.

“I lost all that weight through workouts and diet,” Corbi said. “My daily intake consisted of oatmeal, fruit and walnuts for breakfast and lots of chicken, brown rice and green beans.”

Villanova’s strength and conditioning staff continued to motivate Corbi, and through his toughness and improvement, he made second string his redshirt freshman year. His sophomore year was shortened due to the pandemic, but Villanova went 4-0 that spring season. He made his first start and gained attention from the other teams and writers who cover their league.

Going into the 2021 season, Corbi was named preseason all-conference at left guard and Corbi was also the backup center, the quarterback of the offensive line.

“Offensive line coach Sean Devine really worked with me and my teammates, so we were a very cohesive unit,” Corbi said. “We have improved every year and we’re a very tight group of players and appreciate each other’s hard work.”

That hard work is extremely evident during summer workouts.

“The summer workouts include weight-training and cardiovascular work,” Corbi said. “We run five days a week with two days being conditioning and three days working on speed, agility and plyometrics.”

Corbi was awarded a scholarship and Villanova finished with a 10-3 record in 2021. They went to the FCS playoffs and eventually lost to South Dakota State, 35-21. They were also competitive playing Penn State, losing 38-17 in Happy Valley.

The Villanova lineman has NFL aspirations but is a great student as well. He has a double major in mechanical engineering and psychology. Corbi is also minoring in biomedical ethics and cognitive science. He hopes to take the entrance exam for medical school after he graduates.

Corbi is looking forward to his senior year and has circled the game with Army in West Point.

“Growing up in Arnold and Severna Park, I always heard ‘Beat Army’ every fall, so that is the game I’ll be the most fired up for,” Corbi said.