Trouble At The Push Of A Button 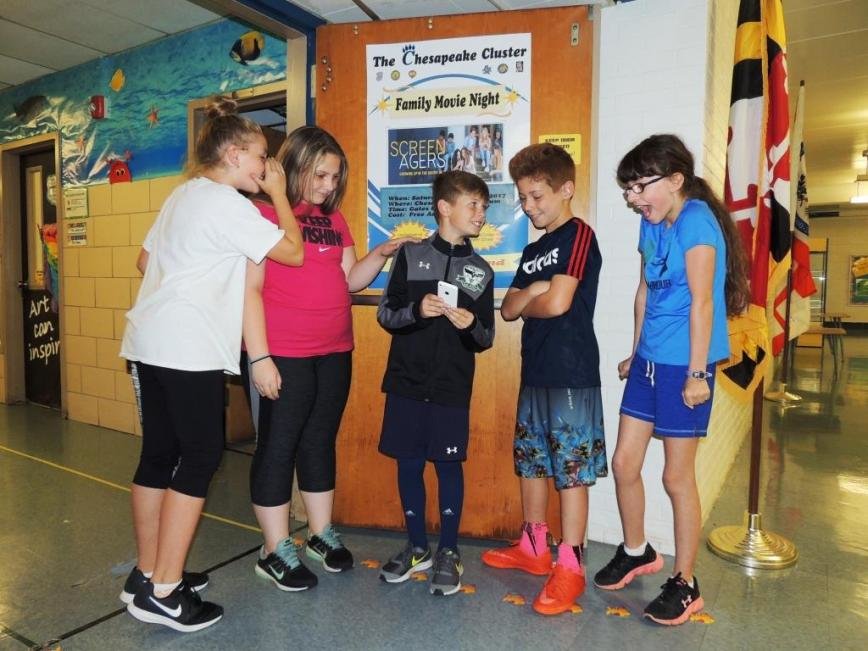 With more and more bullying situations stemming from cellphone misuse, local educators are trying to start a community-wide conversation to make students of all ages more responsible in what they send via text message or post on social media.
Photo by Dylan Roche
Posted Thursday, October 19, 2017 4:05 pm
Dylan Roche and Zach Sparks

When children or teenagers of past generations caused trouble, they had to do it face to face with one another, but with the youth of today connected to their peers 24-7 by the digital world, all the problems that a parent has to worry about, such as bullying or sexual activity, have become more prominent, more easily accessible and much more intense.

“People would be surprised to know just how much we see at the elementary level,” said Rachel Amstutz, principal of Bodkin Elementary School. “We see sexting. We’ve had kids who are cutting because someone dared them over cellphone communication. We’re seeing really mean statements and demeaning language.”

It’s a problem that transcends all ages and grade levels. Principals Steve Gorski of Chesapeake High and Mike Dunn of Chesapeake Bay Middle, along with the principals of the other four elementary schools in the feeder system — Fort Smallwood, Jacobsville, Lake Shore and Pasadena — have each seen it among their own students. “Certainly, we do see that involvement in sexting, online harassment and just inappropriate things teenagers will put out there on social media,” Gorski said. “As the seven principals in the cluster, we feel kids have sort of lost that sense of mindfulness.”

Dunn wants to eliminate that social unrest. “I can’t quantify it, but I would guess that 95 percent of the bullying we see at this age starts with social media – whether they’re insulting someone’s new haircut or what their boyfriend or girlfriend looks like. We want kids to use all [social media] has to offer positively and productively.”

The principals have come together for a yearlong initiative that they hope will engage the entire community in helping children and teens understand the repercussions of their online actions and use more discretion in what they say or do via text messages or social media. Following the example set by the nationwide “Don’t Press Send” campaign (www.dontpresssend.org and #dontpresssend), the Pasadena educators want to help children and parents navigate the ever-changing technological world and promote kind, careful online communication.

“We’re all banding together in a way we’ve not done before — this is the seven schools coming together and saying, ‘We need to open a conversation with our community,’” Amstutz explained. “We don’t own this problem, but boy, do we feel this problem. We’re reaching out to all the businesses, all the coaches, all the pediatricians. We’re reaching out to anybody in Pasadena to say, ‘Be a part of the conversation with us.’”

Pasadena’s Don’t Press Send initiative will formally commence on Saturday, October 21, with an outdoor gathering at Chesapeake High School’s stadium with food trucks and an outdoor screening of the documentary “Screenagers,” which explores the friction created in the lives of modern young people when they spend an average of six and a half hours a day looking at screens. “It echoes the message of the hashtag #dontpresssend,” Gorski said. “It’s meant for kids but also parents, and it focuses on the physical impacts but also the emotional piece of disconnecting from people.”

The initiative will continue throughout the year with a guest visit from Katie Duffy Schumacher, author of the book “Don’t Press Send,” in January, and a to-be-planned project in February to encourage random acts of kindness. Amstutz hopes that the entire community will be able to learn something from the events. “It’s not just the kids we’re talking about,” she said. “There are a lot of adults who could benefit from stepping back for a minute when you’re not happy about something, thinking about what you’re going to send and whether you would say it to someone’s face, and being a little more mindful and considerate before we send messages. We need to teach kids and ourselves to be responsible in how we interact with each other.”

Although this was not a problem that schools or even parents faced prior to five or six years ago, the principals agreed that it isn’t going away any time soon. “We’re not going to solve this problem, but we need to start the conversation,” Gorski said. “This is a new age in parenting, and we’re setting precedents, whether we know it or not, because technology is increasing.”

For Gorski, along with several other principals in the cluster, it’s personal. “As a parent currently in the process, with two sixth-graders myself, they got phones at the beginning of the year,” he said. “I’ve had a lot of conversations with my kids. … It’s about having that maturity with a tool that can be used for a lot of good but can also be used for a lot of bad and to hurt feelings.”

Parents who want to stay engaged with the Chesapeake cluster’s Don’t Press Send initiative, or stay updated on other events and projects as they are announced, can check with a Chesapeake feeder school’s individual site on www.aacps.org. As Amstutz emphasized, their participation will be a big part of the campaign’s success in the Pasadena community. “We know we can’t fix this problem alone,” she said. “It’s got to be everyone coming together.”