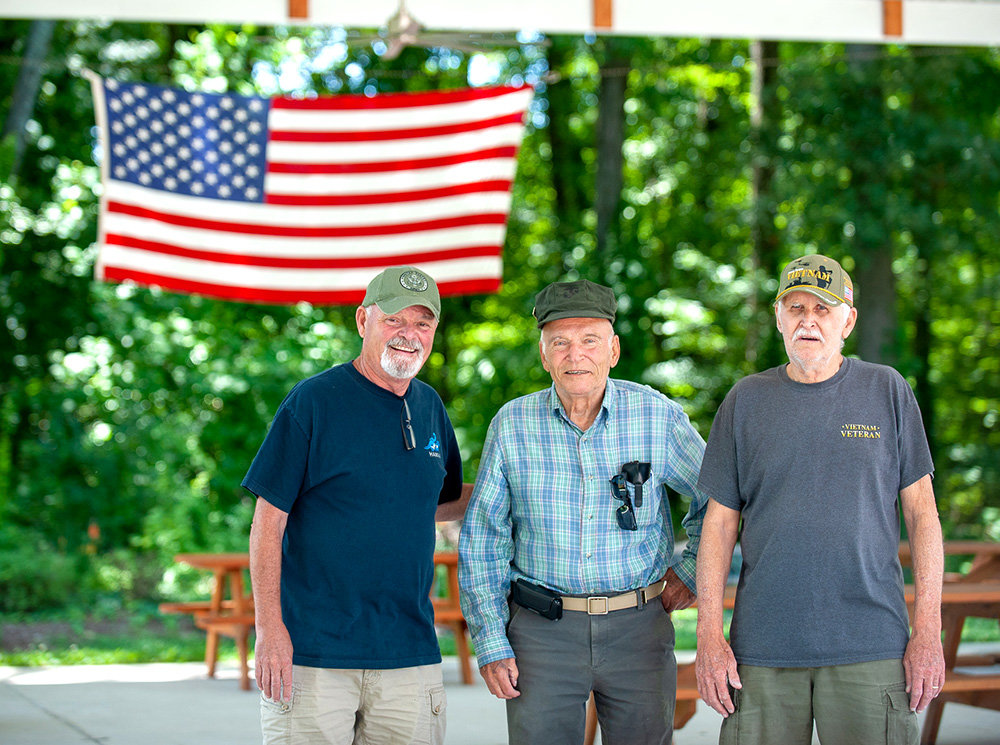 On July 4, 1968, U.S. Marine helicopter pilot Joseph Scholle was shot in the neck while rescuing a man with a broken leg in Vietnam.

“This guy came out of a hidden tunnel with his AK-47 and started firing,” Scholle said. “Then there was this sting. I felt like someone took a hot poker out and stuck me in the back of the neck.”

Scholle lived to tell the tale, one of many stories the Severna Park resident shares with fellow members of American Legion Post 175. Two of those members, William Vincent of Arnold and Post 175 commander Ambrose Cavegn of Pasadena, also have vivid memories from their military days.

The Fourth of July parade serves as a reminder that their sacrifices are not forgotten.

“The parade is a nice thing and it’s nice to be out there because a lot of people salute us and there are other vets out there who salute us,” Cavegn said. “It’s our one day a year other than the Marine Corps birthday, Army birthday or Veterans Day.”

From Enlistment To Deployment

Scholle and Vincent served in the Vietnam War. Cavegn joined the U.S. Army shortly after high school and served for 23 years starting in 1974. He spent most of his time as a combat medic after a few years as an instructor who taught skiing, mountain climbing, kayaking, hiking and rappelling.

Cavegn’s father served in the Navy during World War II, but that was not the reason he enlisted. The military offered an alternative to college.

He originally planned to join the Marine Corps, but when the recruitment office was closed for lunch, he instead went to the nearby U.S. Army office.

“It was a little intimidating with the drill sergeant at first,” Cavegn said of his basic training, “but I enjoyed the camaraderie and the feeling of independence and achievement.”

Scholle entered the Marine Corps Platoon Leader Class program that placed him as a lance corporal.

“I saw ‘Flying Leathernecks’ with John Wayne a few times and I always wanted to be a pilot,” Scholle said.

During his last two years in college, Scholle spent his summer weeks at Marine Corps Base Quantico in Virginia, attending Officer Candidate School. After graduating in 1965, the 22-year-old received his commission as a second lieutenant.

“For six months, I would barf every morning because of the nerves,” Scholle said with a laugh. “Especially with formation flying. I was terrible. I was the pits. Then, instead of having a death grip on the stick, all of the sudden, I started thinking, ‘I can do this.’”

Two years later, in 1967, Scholle started a year-long tour in Vietnam, where he earned the nickname “Crazy Joe.” Just before the start of the Tet Offensive, Scholle hung two microphones outside his hut to capture battles sounds on a reel-to-reel tape recorder. He then took refuge in a sandbag bunker. When he realized he forgot to turn on his recording device, he ran back to the hut to hit the record button. All around him, rockets and mortar rounds exploded on the base.

“When I got back, one of the captains, Joe Clark, said, ‘That’s one crazy Joe,’” Scholle recalled.

Crazy or not, all three Post 175 veterans were recognized for their vital contributions. Vincent was honored with four air medals and a Silver Star. Scholle was recognized twice with the Purple Heart medal and he also received the Distinguished Flying Cross in May 1968.

Writer Carlos Bongioanni detailed the May 1968 incident in a 2014 article in Stars and Stripes, a military newspaper.

As Bongioanni wrote, Scholle piloted the UH-34D Seahorse helicopter to a field near a demilitarized zone between north and south Vietnam to resupply troops engaged in heavy combat. Enemy troops were hiding in the tall grass and started firing. Despite the gunfire, Scholle stayed patient while the crew chief offloaded the supplies before taking off. But there was a problem: his copilot was wounded.

Scholle then realized that either bullets or shrapnel had severed a cord to his helmet, which provided communications on the aircraft. He learned later that the helicopter was also leaking hydraulic fluid. As his Distinguished Flying Cross citation explains, Scholle “lifted out of the hazardous area and skillfully maneuvered” to the nearest medical facility despite all of those severe obstacles.

These memories and others sometimes provoke laughter and offer a sense of achievement, as Cavegn said, but not all memories are happy ones.

As a line medic with the 101st Airborne Division, Cavegn traveled with the infantry and tended to soldiers in their dire moments.

“I’ve seen my fair share of people who have died,” Cavegn said. “To listen to their last words, it’s something I keep with me.”

Some scars are emotional. Some are physical.

“A lot of the Vietnam vets were exposed to Agent Orange,” Vincent said. “I got it and I had prostate cancer. It makes the bones brittle.”

Scholle suffered from ischemic heart disease, which can be caused by exposure to the herbicide Agent Orange.

All three of the veterans said they have post-traumatic stress disorder (PTSD). PTSD will strike during routine activities, making it hard for them to finish projects, such as the restoration of Cavegn’s two 1968 Cadillac Coupe DeVille convertibles.

Therapy dogs sense their owner’s anxiety and calm their nerves. That’s not the veterans’ only coping mechanism.

“American Legion is a way to vent,” Cavegn said. “I call it a brotherhood, but it’s more like a family, because there are women who served too. Just like Toby Keith says, I love this bar.”

Scholle attends occasional reunions organized by Pop-A-Smoke, formed by helicopter pilots who were curious about the whereabouts of their former Vietnam War comrades.

Beyond those events, they speak to high school students about their military escapades and give advice to relatives of deceased veterans.

During a Home Depot trip, Cavegn met a woman who was unsure what to do with her father’s flag and awards, so he accepted the items on behalf of American Legion Post 175.

“It’s our way of giving back to the fallen,” Ambrose said, adding that the respectful action is to burn the flag after a flag ceremony if it is no longer fit for display. “To us, it means something.”

The appreciation from strangers and fellow veterans — on the Fourth of July and throughout the year — means something too. Those moments remind them that their scars and trauma have empowered American citizens to enjoy their freedom back home.

“I know I made an impact,” Cavegn said. “I am a motorcycle rider, and I will go to events where Gold Star moms will come up to me and say, ‘We love our combat medics.’”

Scholle said, “I thought it was good for society that you did your part for the country as a whole.”

Has The COVID-19 Pandemic Impacted Your Child’s Development?

How To Protect Your Child From Drowning

Financial Fitness – Is It Time For A Mortgage Checkup?